Wholesale sales in Alberta rose 0.2 per cent in December to $6.7 billion, according to Statistics Canada.

The federal agency reported on Thursday that sales were up by 1.2 per cent year over year.

Across Canada, it said, wholesale sales rose 0.3 per cent to $63.1 billion in December following a 1.1 per cent decline in November. Sales were up in four of seven subsectors, representing about 64 per cent of total wholesale sales. The motor vehicle and parts and the miscellaneous subsectors led the gains. 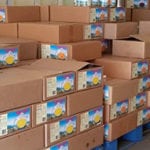 “Sales in the building material and supplies subsector increased 0.7 per cent to $9.1 billion, the first gain in three months. The lumber, millwork, hardware and other building supplies industry (+2.7 per cent) reported the sole increase in December.”

“The inventory-to-sales ratio rose from 1.41 in November to 1.43 in December, the highest level since November 1995. This ratio is a measure of the time in months required to exhaust inventories if sales were to remain at their current level,” added the federal agency.

On a year-over-year basis, wholesale sales rose by 1.7 per cent in Canada.

In 2018, wholesale trade in Canada rose for the ninth consecutive year, up 3.7 per cent to $757.2 billion. Sales were up in six of seven subsectors, accounting for 83 per cent of total wholesale sales.