Conquer yourself to get ahead

Stay the course and hold on to your vision, no matter what anyone says about you

War is a powerful metaphor for work.

So says Kay Hammer, author of Workplace Warrior, Insights and advice for winning on the corporate battlefield.

The real enemies aren’t only bad bosses and inefficient management, it’s also yourself.  The toughest battles we fight are often with ourselves.

Hammer should know. She fought all the way to her former job as president and CEO of Austin-based Evolutionary Technologies International, Inc. (ETI), which she helped launch in 1991. The 180-person company designs software that automates the task of keeping data consistent across an enterprise’s supply chain.

A circuitous route finally landed Hammer in her job. After getting her Ph.D. in linguistics, she taught the subject and literature at Washington State University for six years, followed by a decade of working as a systems programmer for Texas Instruments and Microelectronics and Computer Technology Corp. (MCC) before she decided to strike off on her own.

Self-deprecating and shy about her accomplishments, the veteran techie turned entrepreneur says she kind of “bungled through life.”

“I’ve been wildly lucky and pretty stupid when I look back on my career and personal life,” she admits. “No advance has come without periods of frustration, anger and depression.” 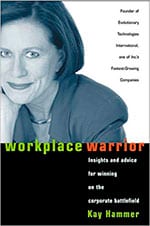 If there is an underlying theme behind Hammer’s success, it’s intense, almost brutal introspection. “There is no better place to discover yourself than the workplace,” according to Hammer. “Work is the ultimate seduction, but it’s also an incredible outlet for spiritual growth.”

Because so much of our energy is channeled into our work, conflicts with ourselves and others are inevitable. “It’s the process of overcoming these conflicts that offers opportunities to grow and change,” says Hammer.

Hammer sees her entire career as a series of battles and skirmishes that had to be conquered. The first was deciding to leave academia and get a corporate job. “My back was against the wall before I started to move,” she says. “I had to endure double digit inflation, single digit raises, two children and an ex-husband to support before I realized my situation wasn’t going to get better.”

Then, there were countless corporate battles Hammer won and lost. Being smart wasn’t enough, she also had to learn how to fight strategically. A hot temper proved an ineffective weapon. “It took me a while to realize I was missing out on opportunities because I was so intent on proving others wrong,” Hammer confesses. “Anger is a great messenger because it warns you that you are afraid of something. It’s gratifying to get angry, but it didn’t help me succeed.”

The enemy? “Half the time it’s you and half the time it is something out there that needs fixing,” says Hammer.  “If you don’t pull back and take your emotion out of situations and understand where they’re coming from, you’ll often make it a personal battle where everyone looses as opposed to figuring out how to reach your goals so you can avoid fighting. Often, the very thing motivating you is what is holding you back.”

But, if you have to fight, do it dispassionately. “You don’t necessarily have to crucify anyone,” she says. “The idea is to get what you want.”

The problem with techies is they often refuse to compromise. “Because they’re technical, they have a tremendous amount of discipline and often are extremely creative,” she says. “They have a model for the way things ought to be done and they don’t want to compromise in order to do a job they feel good about.  But, on the real life workplace battlefield, compromise is part of the game, especially if you hope to move up.”

Hammer’s four secrets leading to success?  First, you don’t need permission to take risks or succeed; Second, while admiration and approval feel great, you have to be willing to follow your conscience and risk adulation; Third, to win your private war and achieve your goals, be prepared for periods of failure and hardship; And fourth, don’t read your own press. If you get good press, you’re also going to get bad press, which is a kind of temperature gauge telling you how well you’re doing.

The idea is to stay the course, hold on to your vision no matter what anyone says about you.

Dana Wilson is a freelance writer based in Edmonton, Alberta.