Any perceived barriers appear to be unjustified 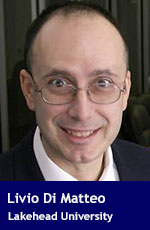 A new study in the Canadian Medical Association Journal with health economist Steve Morgan as lead author argues a national universal care drug program would not result in substantial tax increases. Indeed, such a plan reduces public and private spending on prescription drugs by $7.3 billion annually – or by 32 per cent.

The authors suggest that any perceived barriers to the implementation of a national universal care drug plan appear to be unjustified. Given that a national drug program is the forgotten child of Canadian public healthcare and was also advanced in the 2002 Romanow Report, the time may finally be ripe for such a plan.

With the federal government close to balancing its budget and future surpluses possible under the current federal tax structure, new resources may become available without the need for tax increases. Also, aside from the fact that it is going to be a federal election year, another reason why now might be the appropriate time to consider implementing a national drug care program is that the costs of public drug spending have actually been declining, making it even more attractive to introduce such a plan.

According to expenditure numbers from the Canadian Institute for Health Information (CIHI), it is estimated that, in 2014, provincial-territorial governments spent $10.4 billion on drugs. Despite past concerns of escalating public drug plan costs, the growth rate of this spending has declined remarkably.

Pharmaceuticals used to be one of the fastest growing parts of healthcare spending in Canada. Between 2000 and 2005, the average annual nominal growth rate of provincial-territorial government drug expenditure was 11.7 per cent. This dropped to an average 6.3 per cent annually for the 2005 to 2010 period while the average since 2010 is approximately 1 per cent annually. Indeed, the estimated growth rate for this spending in 2014 is actually negative.

As a result, the share of drug expenditures in provincial-territorial health spending has been on a decline since peaking in 2006 at just over 8.4 per cent and now stands at 7.4 per cent. Per capita nominal drug spending by provincial and territorial governments has also been on the decline peaking in 2011 at approximately $300 per capita and estimated at $292 in 2014 – a 2.6 per cent decline.

The prospect of federal surpluses removing the need for any tax increases given the modest outlay projected in the report, base case scenario, combined with the demonstrated declining cost of drug spending, suggests that this may indeed be an ideal time for a national drug plan.

The caveats? First, basing decisions on best-case scenarios may be an overly optimistic way in which to implement public policy changes. It would be more fiscally prudent if any planning for a national drug plan made use of the worst case cost scenarios. Cumulative federal surpluses over the next five years have been estimated by TD Economics at as much as 56 billion dollars – an average surplus of 11.2 billion dollars annually. Even if we consider the impact of the recent slowdown on federal revenues, the worst-case scenario of 5.4 billion dollars in annual spending still appears quite affordable.

Drug plan can be fiscally sustainable

Second, the recent decline in drug spending may be transitory. The savings have resulted from government regulation of drug prices, increased use of less-expensive generic drugs as well as slowdown in innovation of new pharmaceutical products. However, there are likely fewer savings from generics on the horizon that to date have led to spending declines in some medicines to treat common conditions such as cholesterol-lowering drugs and anti-hypertensives. As well, while there are fewer new drugs coming onto the market, the average cost of these new drugs in specialty areas like cancer and rheumatoid arthritis is actually quite high.

Despite these caveats, it seems the time is ripe to finally complete our universal system of public healthcare coverage by adding a national public drug plan. If anything, the aforementioned cautions should serve as guideposts to make sure a new national drug plan is not only effective but also designed in a fiscally sustainable manner.

Livio Di Matteo is Professor of Economics at Lakehead University.