A team of University of Alberta researchers has identified a new mechanism through which tumour cells become resistant to chemotherapy – a discovery that could lead to better treatments for women with breast cancer.

Michael Jewer, a post-doctoral researcher in the Faculty of Medicine & Dentistry, said that more than 20 per cent of breast cancer patients will die due to therapy resistance and metastasis, the spread of the original tumour to other parts of the body. 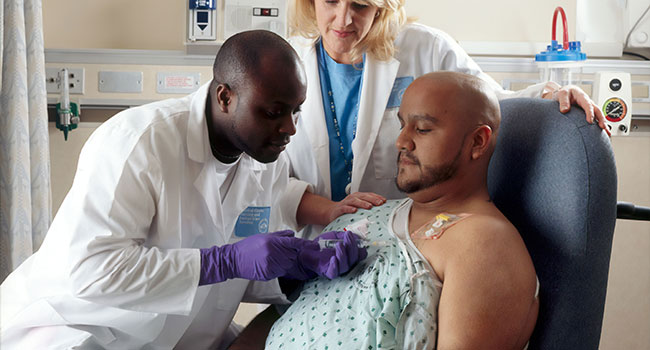 One way therapy resistance occurs is through hypoxia, or low oxygen levels. Hypoxia can occur within a tumour because it grows much more quickly than the surrounding tissue.

And because blood vessels aren’t able to grow deep into the tumour, there is an area within it that remains deprived of oxygen and nutrients. This can cause major changes in the cells, the most notable being plasticity, a characteristic that allows the tumour cells to become metastatic.

Jewer and Lynne Postovit, who recently joined the Department of Biomedical and Molecular Sciences at Queen’s University, are part of the team that turned their attention to mTOR inhibitors, a group of drugs that have been used in various ways to treat cancers. mTOR inhibitors interfere with a cellular pathway in the same way hypoxia does, so they wondered whether these drugs could do something similar to what hypoxia did within the tumour cells.

They found that mTOR inhibitors did mimic hypoxia and resulted in the production of different versions of three messenger RNAs (mRNAs), information carriers the body uses to produce proteins from our genes.

These different versions are especially suited to allow protein production in stressful cancer conditions such as hypoxia and chemotherapy, and the production of proteins from them leads to tumour progression.

“By better understanding this mechanism that allows tumours to progress and become metastatic, we can potentially devise treatments to prevent it,” explained Jewer, who along with Postovit is a member of the Cancer Research Institute of Northern Alberta.

According to the researchers, when an experimental drug called ISRIB that interferes with the reprogramming of protein production – like what is happening with the three mRNAs – was administered, tumour progression was halted.

The findings have led to further questions.

One of the next steps involves looking at whether compounds such as ISRIB – a drug that has been shown to mitigate many negative effects of cancer therapy – can be used to potentially help prevent metastasis and therapy resistance.

The study, Translational Control of Breast Cancer Plasticity, was published in Nature Communications.

This article was submitted by the University of Alberta’s online publication Folio, a Troy Media content provider partner.