By Dean LaBerge, Gazette Reporter on September 1, 2021No Comment 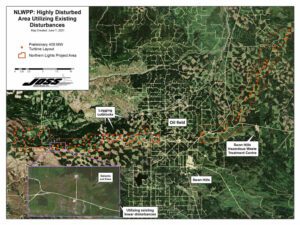 A commercial-scale wind power project proposal by Joss Wind Power Inc. has received an initial show of support from Big Lakes County. If successful, Joss Wind’s proposed Northern Lights Wind Power Project (NLWPP) could create up to  1,000 person-years of employment and see as many as 100 wind turbines constructed north of Swan Hills. The project would produce up to 400 MW of electrical power with 110 – 120 m (360 – 394 ft) high commercial wind turbines.

The proposed project could generate as much as $100 million in tax revenue over the next 25 years while bringing much-needed jobs to the region and producing low-cost power. The $800 million proposal will be a massive undertaking, and as such, Joss Wind has partnered with Potentia Renewables (a subsidiary of Power Corporation of Canada) for this endeavour.

One of the first challenges for this project is that the proposed sites for the turbines are on Crown land. The Government of Alberta currently does not have a policy for allowing wind power generation projects on Crown land.

According to Bryan Clake, president of Joss Wind Power Inc., there is a two-step process to overcoming this challenge. “We would view getting a public land disposition as one of the early pre-requisite stages,” said Clake. The next step involves a very rigorous process through the Alberta Utilities Commission (AUC), including many technical studies and extensive consultation with the public and Indigenous communities.

As an initial step towards attaining a public land disposition, representatives from Potentia and Joss Wind presented the NLWPP to the Big Lakes County Council via Zoom at their July 28 meeting, hoping for a letter of support from the County to be sent to the provincial government. On August 23, The Grizzly Gazette received confirmation from Brett Hawken, Director of Community & Protective Services for Big Lakes County, that “the County has written a letter of support to the Minister of Environment and Parks in support of the provincial government granting Potentia Renewables the land dispositions they are asking for to erect the wind turbines.”

While this is a positive development for the NLWPP, the project is still very much in its preliminary stages. The next step is to wait to see how the province responds and if the land dispositions are granted.

Regarding the timeframe of an undertaking like this, Clake indicated that this type and scale of project would take some time to come to fruition. Even if things go well, it could take until 2025 before construction started.