After a summer fraught with uncertainty, The Gym has reopened in what was once the United Church at the corner of Home St. and Plaza Ave. 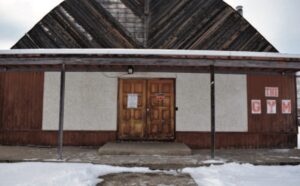 The Swan Hills Fitness & Lifestyle Association (SHFLA), the non-profit organization behind The Gym, had received the news at the end of June that the building housing The Gym at that time had been sold. The required rent increased with the change in ownership, and as a non-profit organization, the SHFLA could not meet the new requirements. Initially, the SHFL A was to have all of their belongings and equipment removed from that location by the end of July, but they hadn’t found a place to go to by that deadline, so they rented for an extra month, pushing their moving deadline to the end of August.

In searching for a new location, the SHFLA contacted numerous businesses and owners of known empty buildings but couldn’t find a suitable location that the nonprofit organization could afford. They approached the Swan Hills Town Council at the July 13 Town Council meeting with a sizable group of roughly 20 – 30 supporters to present their situation and seek assistance. Regrettably, The Town did not have an unoccupied space to offer, and the 2022 budget had already been set the previous fall with little to no margin for added expenses.

During the discussion at the Town Council meeting, someone mentioned that the building that had once housed the United Church was unoccupied and might be a suitable and affordable option. The SHFL A contacted the group that owned the church to inquire about buying it. After holding a board meeting to discuss the possible sale, a price was set, but unfortunately, the SHFL A was unable to meet it.

In a turn of events that serves to highlight the generosity and community spirit present in Swan Hills, a resident of the town purchased the building and has agreed to let the SHFLA use it for The Gym. SHFLA President Gwen Senner expressed her gratitude, saying, “The right thing falls in your lap when you need it the most, and that’s what happened here. 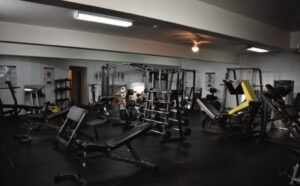 Getting The Gym’s equipment into the church was an ordeal described as a “brutal move” by Senner and SHFLA Vice President Ryan Schonheiter. The smaller items out of The Gym’s assets were moved over a weekend, but moving the heavier equipment was quite the experience.

Senner and Schonheiter emphatically expressed their appreciation for the many Swan Hills community members who helped out all throughout the move, with Schonheiter explaining, “This place exists in its current state directly through community support, from members and non-members.” This sentiment was absolutely highlighted in how events came together for the SHFL A to have the use of a truck and trailer, and skid steer to move the larger equipment but ended up having to move it all in one day. Volunteers from the community came together to help the SHFLA complete this monumental task, with many of them coming straight from their jobs in the afternoon.

In addition to emptying the building and moving in The Gym’s equipment, SHFLA members and helpful volunteers from the community have performed significant renovations to convert the church into a well-appointed and functioning gym. While much of the work has been completed, some renovations and repairs are still ongoing.

The Gym had a soft opening on Nov. 16, welcoming existing members back and offering memberships to new members. Members have 24/7 keycard access to the new facilities, as was provided at the previous location. 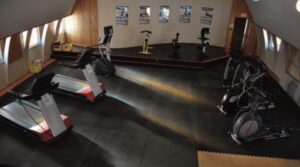 The SHFL A has received a positive response on The Gym’s new location from their members and the community. The facilities are now more accessible to the community, given the central location of the building relative to the town.

Even with all of the ups and downs along the way, Senner and Schonheiter report that it’s been an incredible experience.

The SHFL A will be hosting a community dance on Dec. 10 to celebrate The Gym’s reopening and thank the community. The Together Again For Christmas fundraiser will be an adults-only formal evening with a live DJ, dancing, prizes, refreshments, and more. Tickets are available from SHFLA board members for $30. –