Ares has accelerated its RC drilling exploration program, expanding the known LGP target after a successful first round of delineation drilling. The Company has also discovered a new area of fluorspar mineralization between the recently drilled (LGP) mining site and the historic mining area of the Purple Pit. Both mining sites are characterized by high-grade fluorspar mineralization and geological evidence now clearly indicates the LGP branches off from the Purple Pit. Drilling suggests the newly discovered fluorspar connects these mining areas and forms one large single fluorspar bearing breccia. Current drilling has delineated a fluorspar zone over >35m long and 15m wide in plan view (see Figure 1). Drilling has further tested the zone to a vertical depth of 70m as per the deepest drill intersect (see Figure 2). Mineralisation is still open to the north, south and at depth. 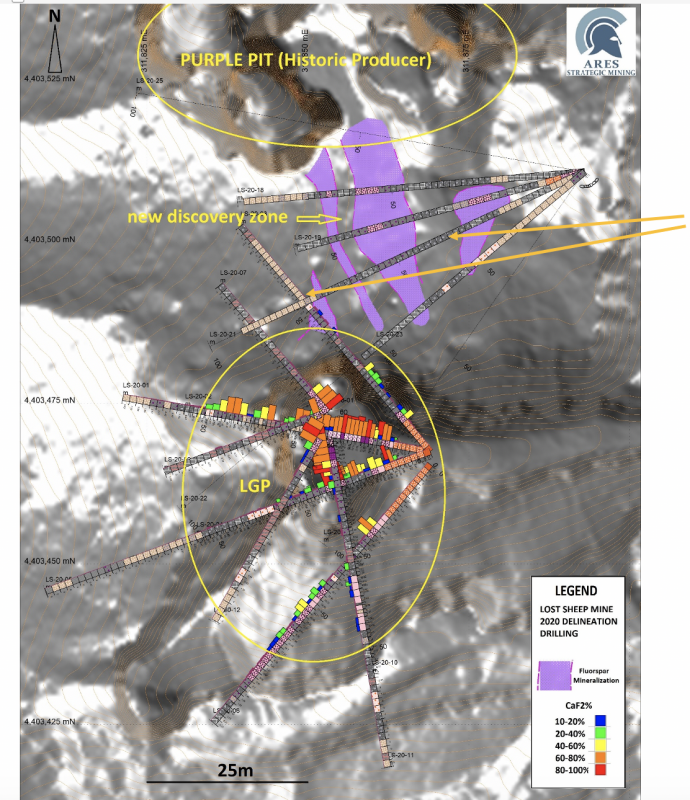 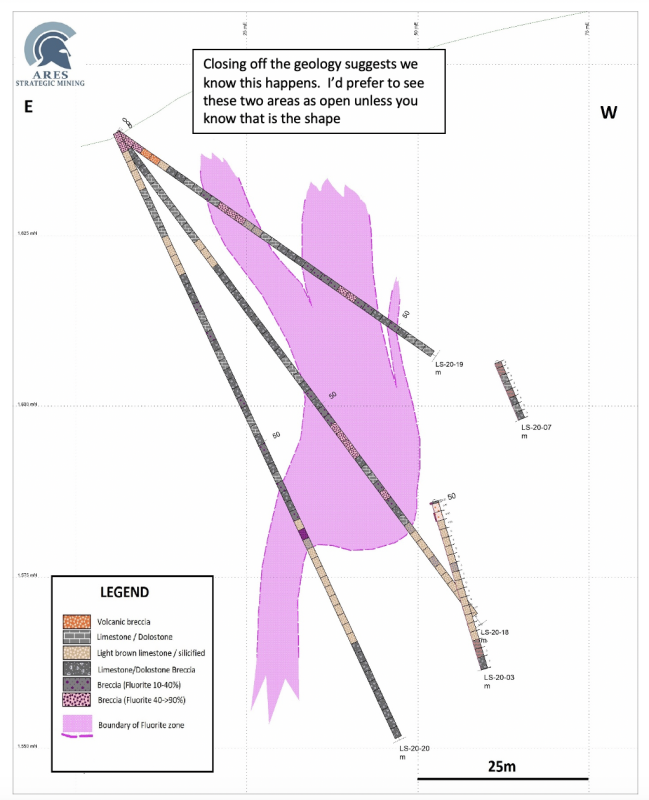 Drilling is currently progressing with five holes already completed for a total of 420m and at least four more holes are planned for an additional 400 m to continue further delineation of this zone.

Once the current site has completed its delineation drilling, the Company will progress to confirm other prospective targets immediately adjacent to the current operation (250 and 350 meters Northeast), which also fall within the Company’s permitted mining area (See news release dated Sept. 9th, 2020). These targets are based geotechnical and Lidar data obtained by the Company, which it has used to create a conceptual model that links the fluorspar bearing breccia pipes which are exposed at surface, and fluorspar contained within fault planes where severed fluorspar pipes remain in the hanging wall blocks. Ares is confident that these targets can be identified based on surface expression features (recessive topography and disruption of stratigraphic markers such as thick limestone beds). The targets have been identified with surface reconnaissance and the occurrence of breccias with varying degrees of alteration and fluorspar. A minimum of 5 holes (500 to 700m) will be drilled at these NE target zones and if successful, Ares will begin to delineate additional fluorspar mineralization readily accessible from surface for future operations.

James Walker, President and CEO of the Company said, “The high grade results from the last drill program gave us a great insight into the geology and layout of the subsurface fluorspar mineralization, and directed the Company towards locations where high-grade fluorspar was likely located. The first drill holes have confirmed that Ares’ geological assessment were correct, and credits its VP of Exploration, Mr. Raul Sanabria with the successful analysis of the available technical information. Ares can now consider expanding its proposed production capacity and processing facilities at its mine and anticipates secondary and tertiary mining operations at other sites alongside its Giant Little Pit operation. The Company and its staff are excited at the tangible near-term and long-term prospects, and are looking forward to commencing operations and being the only domestic supplier of metspar and acidspar to the U.S.”

After the initial very encouraging results, Lead Mining Engineer, Mr. Keith Minty, who is leading the mine and engineering planning work for the near-term mining operation, has requested that his future invoices continue to be settled through a Shares for Service arrangement, whereby 60% of his remuneration will be settled in Ares stock. The Company is pleased to approve this request as an endorsement of the project.

Raul Sanabria, P.Geo., is a qualified person as defined by NI 43-101 and has reviewed and approved the technical contents of this news release. Mr. Sanabria is not independent to the Company as he is a Director and shareholder.

ON BEHALF OF THE BOARD OF DIRECTORS OF

For further information, please contact Mark Bolin by phone at 604-781-0535 or by email at mbolin@aresmining.com

Neither the TSX Venture Exchange nor its Regulation Service Provider (as that term is defined in the policies of the TSX Venture Exchange) accepts responsibility for the adequacy or accuracy of this release. No stock exchange, securities commission or other regulatory authority has approved or disapproved the information contained herein.