– High grade zones up to 89% purity discovered at Ares’ Lost Sheep Fluorspar Mine.

– Ares immediately commences mine planning and modelling with assay results.

Vancouver, B.C. – TheNewswire – August 31st, 2020 — Ares Strategic Mining Inc. (“Ares” or the “Company”) (TSXV:ARS) (OTC:ARSMF) (FRA: N8I1), is pleased to announce it has received all the assay results from its 12 Reverse Circulation delineation drill holes from the drill program conducted at its Lost Sheep Fluorspar mining operation located In Delta, Utah, US.

James Walker, President and CEO of the Company said, “The results have been a great validation of our project assessment and its potential. Not only do we have the only permitted and producing fluorspar mine in the U.S, but we can now confirm that high grades of naturally occurring fluorspar at our mine. This is excellent news for U.S. industries which import 100% of its fluorspar from abroad. Fluorspar is used in aluminum, steel, refrigeration units, electric car batteries, smart phones, medical supplies, cement, and hydrofluoric acid, and now U.S industry has the potential to source fluorspar domestically instead of from abroad. We have discovered large sections of fluorspar which already meet industry standards. We have commenced plant design work, block modelling, and resource calculations for the drilled and assayed fluorspar pipe. With the already completed metallurgical work, which the company recently announced had achieved the highest grade required by industry, Ares is advancing with its mine construction plans with the anticipation to supply to US industry in the near future.”

High-grade fluorspar is located within discrete near vertical fluorite bearing volcanic breccia pipes hosted within competent limestone. Due to working safety and space limitations inside the actual LGP pit, all 12 RC drill holes were drilled from two locations/pads fanned through the fluorite bearing breccia pipe boundaries at different elevations to delineate the shape and grade distribution of the Fluorspar mineralization within it as well as the contacts with the limestone wall rock at different elevation levels.

A summary of the drill intersects, and grades can be seen in the table below.

As seen in the sections 1 and 2 following text, Fluorspar grades above 60% CaF2 are concentrated in the uppermost portion of the pipe to a depth of 35 to 40m, and then sharply decrease to 10-20% CaF2 averages in the lowermost part of the pipe (root). Silica contents are in general very low and there are no visible sulfides or any other deleterious elements, making it very clean product for further upgrading to acidspar.

For a more comprehensive view of the 3D distribution of Fluorspar and drill hole intersects, please follow the link below to access a video posted in the company’s website:

Core samples were sent to SGS in Burnaby (British Columbia) for preparation and then to SGS in Lakefield (Ontario) for analysis, with approximately three control samples inserted (one blank, one standard and one field duplicate for each twenty samples). The samples were analyzed for fluorine element using GC XRF76V (Included F 0.1-50%) package, that also includes SiO2%, Al2O3%, Fe2O3%, MgO%, CaO%, Na2O%, K2O%, TiO2%, P2O5%, MnO%, Cr2O3% and V2O5%. Comparison to control samples and their standard deviations indicates acceptable accuracy of the assays.

The drill hole information has been shared with P&E Mining Consultants to start working in a mineral resource estimate, economic models and subsequent mine design for optimum mining methods moving to the next stages of development which precede mining and production. 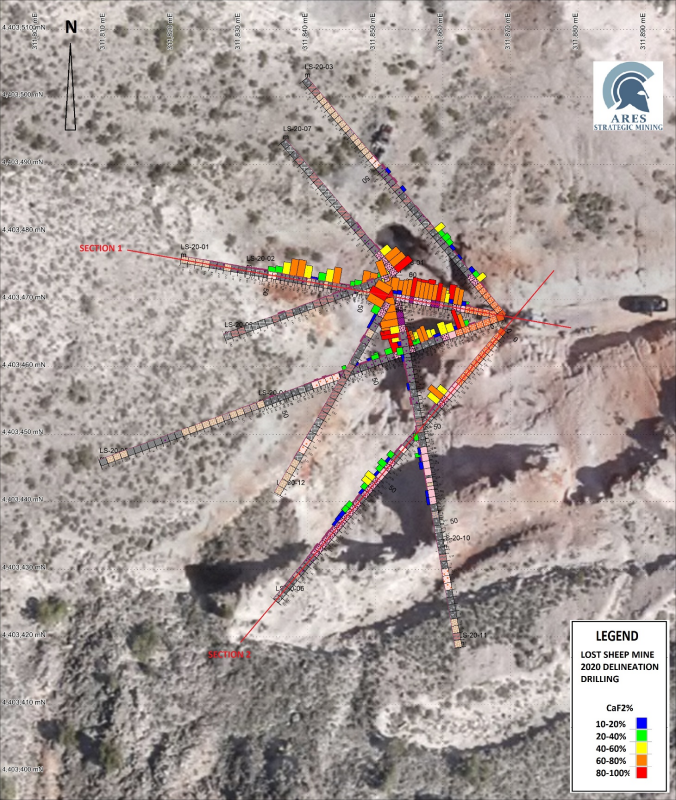 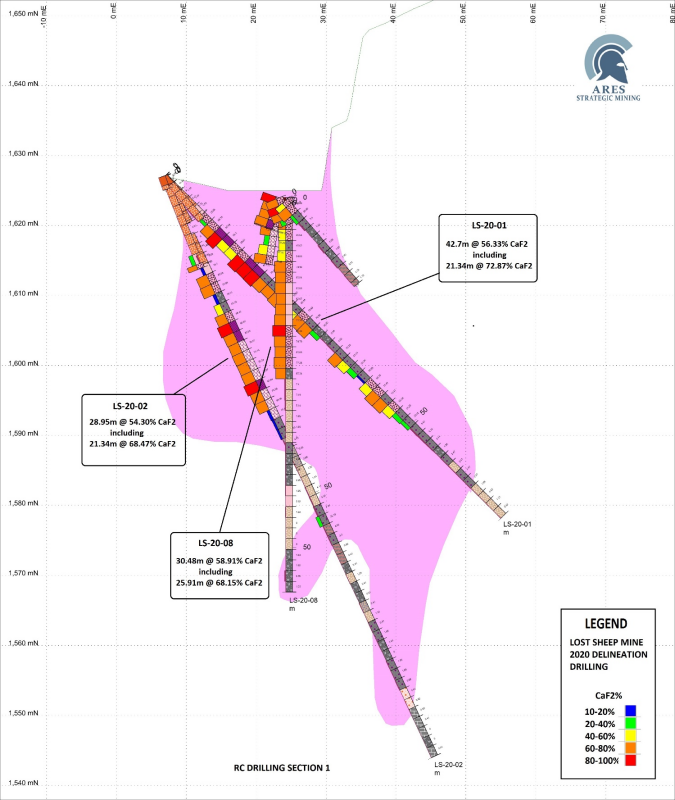 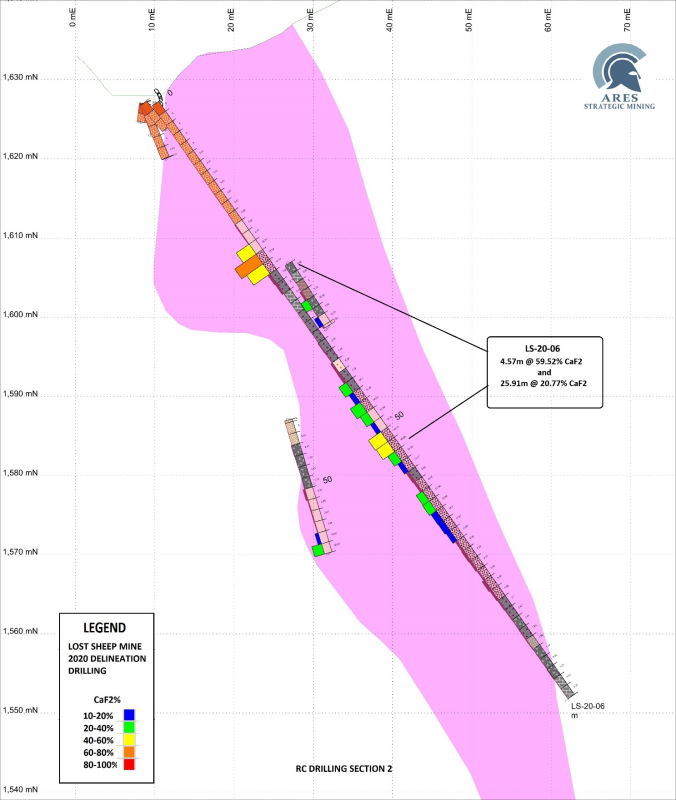 RC Drilling Section 2 of the fluorite bearing pipe indicating the continuity of the fluorspar mineralization below 75m from surface, even though at lower grades (between <10 to 30% CaF2) than those found near surface.

Raul Sanabria, P.Geo., is a qualified person as defined by NI 43-101 and has reviewed and approved the technical contents of this news release. Mr. Sanabria is not independent to the Company as he is a Director and shareholder.

ON BEHALF OF THE BOARD OF DIRECTORS OF

For further information, please contact Mark Bolin by phone at 604-781-0535 or by email at mbolin@aresmining.com

Neither the TSX Venture Exchange nor its Regulation Service Provider (as that term is defined in the policies of the TSX Venture Exchange) accepts responsibility for the adequacy or accuracy of this release. No stock exchange, securities commission or other regulatory authority has approved or disapproved the information contained herein.