TORONTO, CANADA – TheNewswire – September 1, 2020 – Terreno Resources Corp. (TSXV:TNO.H) (“Terreno” or the “Company“) is very pleased to announce that the Company has filed an NEX Form C – Notice of Proposed Share Issuance / Financing with the NEX for review. Subject to regulatory approvals, the financing is for $460,000 consisting of 9,200,000 units at $0.05 Each unit consists of a common share plus one share purchase warrant. Each warrant will be exercisable at $0.07 for a common share until the expiry date to be twelve months from the financing closing date.

The Company has also requested approval for 126,000 common shares and 126,000 non-transferable warrants exercisable for 12 months at $0.07 to be issued as finders fees to the following parties:

Terreno’s work programs will be focused on defining structural controls in the known precious metal areas and connecting mineralized zones into larger targets in preparation for diamond drilling. Given the very large exploration area, the main showings have been grouped into 5 main zones in order to focus more detailed work (see Map 1).

The 5 zones are grouped as:

Exploration work was carried out by Maverix Metals Inc. (formerly MacMillan Minerals Inc. and the predecessor company MacMillan Gold Corp.) between 2003 through 2012. This work succeeded in identifying fourteen mineralized zones over a north-west trending zone that is six kilometres in length, as well as several other showings outside of this main zone. Mineralization is characterized as volcanic-hosted, low-sulfidation, epithermal gold and silver in vein and shear structures, stockwork zones, and breccias. Classic low sulfidation textures are common, including banded quartz veins and breccias, as well as drusy, bladed, and chalcedonic quartz.

Confirmation samples collected by Terreno personnel at several of the main showings on the property during 2018 returned very encouraging precious metal results. Grab samples were taken in both underground and surface exposures of known mineralized areas. Grab samples are not indicative of mineralized widths.

Highlights of 2018 sampling results include the following:

The 2019 exploration programs at Las Cucharas continued to provide additional evidence of a widespread hydrothermal precious metal system with greater size potential and continuity than was previously indicated. A total of ninety (90) samples were collected from new outcrop exposures. Map 4 indicates the locations of the 2019 sampled zones (see Map 4).

The La Union and El Cardon Zones are sub-parallel vein structures which have been traced over 800 metres in strike length. These zones have significant underground development on several levels and were major contributors to gold and silver production at Las Cucharas.

New exposures were sampled to the northwest, southeast, and west of the main mineralized zones. Extensions of the structures are typically 1.5 metres in width where exposed, and consists of intense quartz veinlets in a strongly silicified fault breccia matrix. Limonite and hematite iron oxides are common, and pyrite is locally visible.

Sample highlights from the Veta La Amapa (Amapa Vein) are shown below. This structure had not been sampled previously and is located over 150 metres to the southwest of the main La Union structure.

Jocuixtle is part of the northwest-trending La Italia-Jocuixtle-La Taverna-Los Gallos vein system, which has been traced over 1.2 kilometres, and was an important contributor to historic gold and silver production at Las Cucharas. The main underground working is collapsed and not currently accessible.

The main Jocuixtle structure is a combination of clay-rich fault or sheared volcanic rock with abundant quartz veins and veinlets, and ranges from 1.5 to 4.6 metres wide where exposed. The wallrock typically has fine quartz veinlets and strong clay-sericite alteration with fine disseminated pyrite. Fine disseminated galena and malachite staining occur locally, and hematite and limonite iron oxides are common. The first two samples below represent mineralized wallrock, and the following samples represent vein material.

The La Guaca Zone is located to the northwest and is thought to be the northern continuation of the La Italia-Jocuixtle-La Taverna-Los Gallos vein system, with a cumulative length of 1.2 kilometres.

The main La Guaca structure in this exposure is 1.5 metres wide with a north-west orientation consisting of drusy quartz veins, calcite veinlets, and abundant iron oxides. Lateral and parallel to the main structure are sericite-clay-calcite alteration zones with fine disseminated pyrite and abundant iron oxides, which in turn, changes outward to propylitic epidote-chlorite-calcite alteration, and then to relatively unaltered intermediate volcanic rock. The main structure and lateral alteration zones are greater than 16 metres in true width. A previously unknown adit is now exposed and follows this structure.

The El Coco Zone is a newly discovered vein exposure approximately 800 metres to the east of La Guaca with a collapsed underground working. The vein structure indicates a northwest strike, is 1.5 metres wide, and consists of abundant quartz veinlets in a fault breccia matrix.

The alteration and mineralization style at Corral de Piedra appears very similar to that of the El Molino Zone, and is located approximately 1.5 kilometres to the east-northeast of El Molino. Both zones are located near to the southeast extent of the project area.

At El Molino, gold and silver values are associated with predominantly northeast-trending banded quartz and quartz +/- tourmaline veins, veinlets, and breccias with a characteristic black weathering from a manganese-rich mineral assemblage. Surface sampling from previous operators over a 100 x 380 metre area reported values of 1.13 g/t Au and 143 g/t Ag over 3 metres, with individual samples ranging up to 4.84 g/t Au and 95.4 g/t Ag. Precious metal mineralization in this area appears to be widespread due to the intersection of fault and fracture systems with different orientations.

Several new exposures have been identified in the 1.5 kilometre area between El Molino and Corral de Piedra with similar alteration and mineralization styles.

New exposures at Corral de Piedra have been traced over a 100 metre long area and appear to define an alteration and vein zone that is over 4 metres wide with an east-northeast orientation. Quartz veins and veinlets show variably banded, brecciated, cockscomb or drusy, and locally chalcedonic textures. Gold values are generally low, but widespread silver values indicate the presence of a large continuously mineralized precious metal zone in this area. Terreno will conduct follow up sampling in this 1.5 kilometre area to determine continuity and potential.

Once environmentally permitted, the proposed follow up exploration program will have two phases. The first phase will consist of mechanical trenching, mapping and sampling. The objective is to help define continuity of the mineralized structures and to connect the known mineralized areas into larger drill targets. Subject to adequate working capital, the proposed second phase will consist of exploration diamond drilling targeted based on compiled results of the mapping, sampling, and geological modeling.

Review of the historical work and the initial property assessment has been carried out by Mr. Cary Pothorin, P.Geo., Vice President of Exploration for Terreno Resources Corporation, and a Qualified Person (“QP”) as defined by National Instrument 43-101. Mr. Pothorin, as QP, has prepared, supervised the preparation of, and approved the scientific technical disclosure in this news release.

Mr. Pothorin is a professional geologist in good standing with the Association of Professional Engineers and Geologists of British Columbia. Mr. Pothorin has a B.Sc. with Specialization in Geology from the University of Alberta and a Business Administration Diploma from Camosun College in Victoria, B.C. and is fluent in Spanish with over 25 years of work experience throughout the Americas.

Additional information on the Company can be viewed at www.sedar.com

Neither The TSX Venture Exchange nor its Regulation Services Provider accepts responsibility for the adequacy or accuracy of this release. 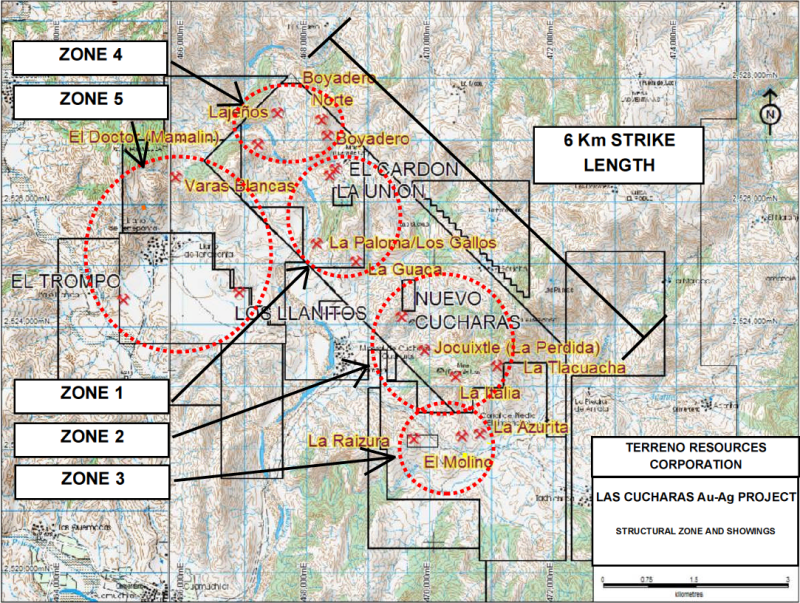 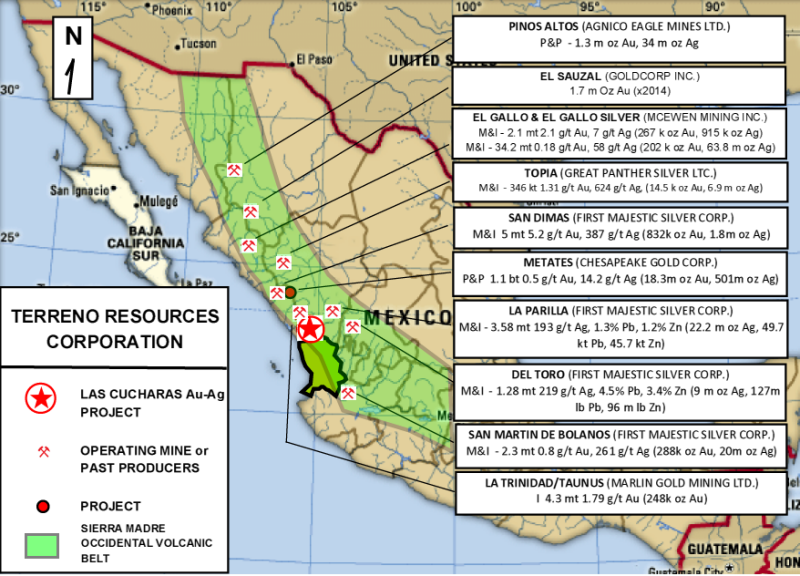 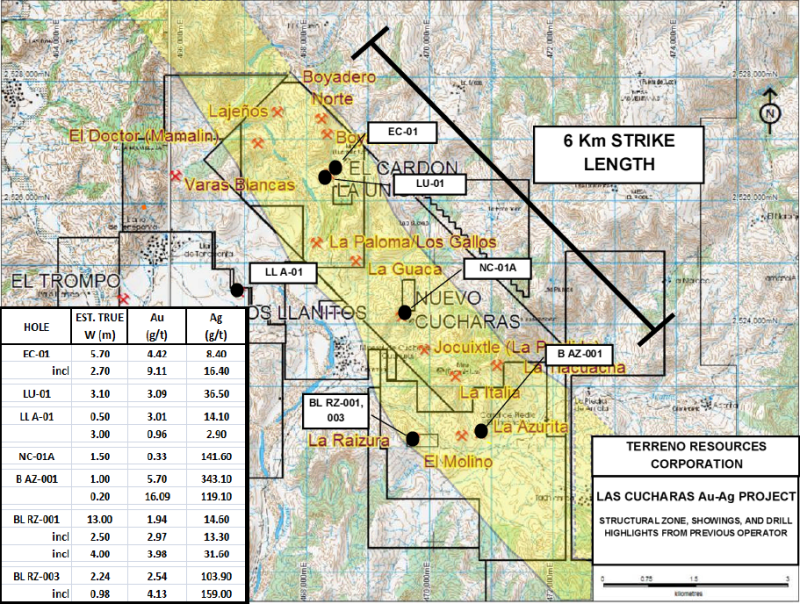 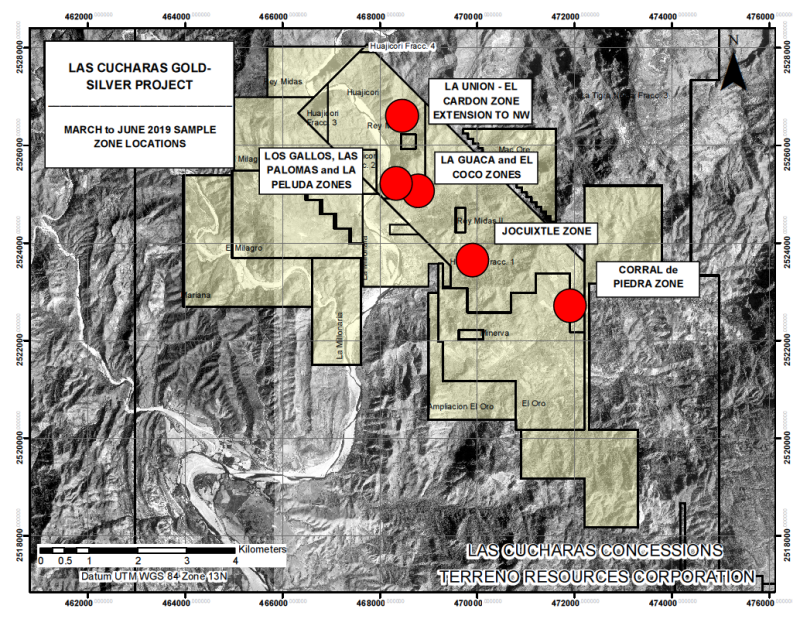 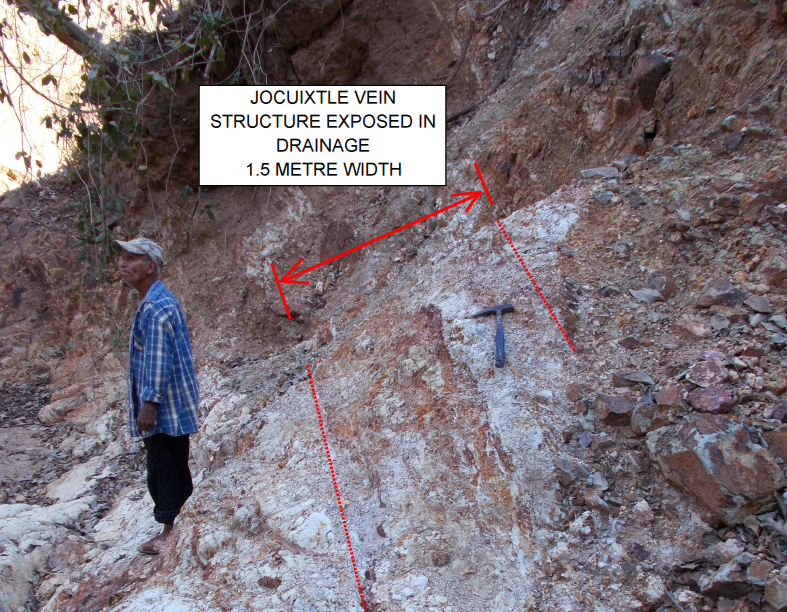 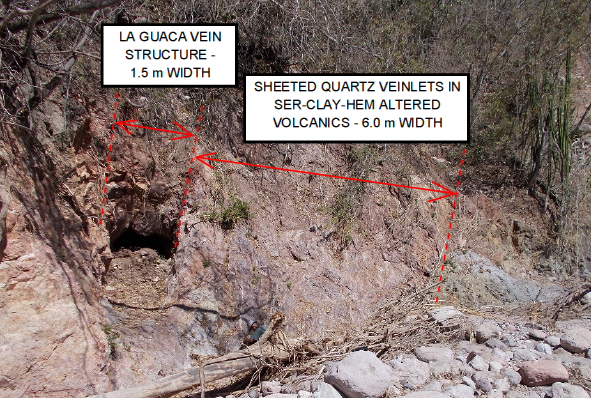 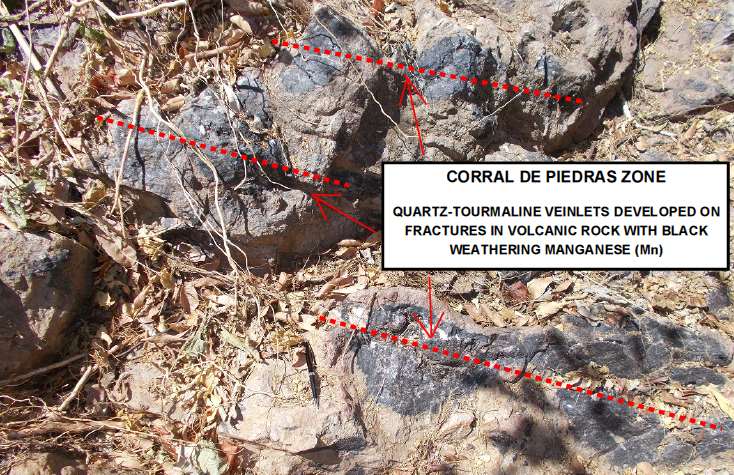