Pilots, athletes, dementia patients and more could benefit from this brain boost 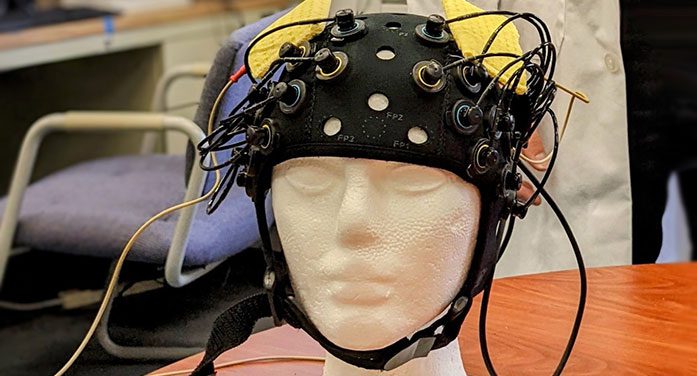 Imagine putting on a helmet embedded with tiny electrodes that sit on your scalp, delivering a gentle electrical current to certain areas of your brain. After about 10 to 20 minutes, you might find yourself with a better ability to focus, sharper memory and a host of other cognitive benefits.

That’s the idea behind a promising experimental treatment that could have applications for a wide range of people, from aircraft pilots looking to gain a cognitive edge to athletes trying to level up their mental game to patients living with dementia.

“It’s very well tolerated, the current is minimal, so safety-wise we know it’s very safe,” says Figeys. “Now we’re at the point in the field of determining what it does in different populations.”

In the treatment, called transcranial direct current stimulation (tDCS), a researcher attaches electrodes to a patient’s scalp that deliver a low current between one and two milliamps. Figeys likens the overall experience to an electrical nerve stimulation device commonly used for physiotherapy.

“I’ve had people say it feels like a slight prickling sensation, almost like a mild tattoo sensation.”

TDCS isn’t the first treatment to use electrical currents to stimulate the brain for positive benefits. Some treatments, like implanting a device to deliver deep-brain stimulation, can help people living with disorders such as Parkinson’s disease. However, they’re invasive and require an experienced neurosurgeon. TDCS is non-invasive, and a wide variety of clinical researchers, including nurse scientists, can deliver it.

“When we stimulate the brain, we make the neurons more efficient. It’s also thought that we might be changing the blood flow going to those neurons as well,” says Figeys. Increased blood flow to certain areas of the brain often goes hand in hand with increased cognition, he explains.

This field of research is relatively new – according to Figeys, researchers didn’t really turn their attention to it until the early 2000s. While researchers know the technology is safe for most people, Figeys notes they’ve excluded a few groups thus far to err on the side of caution, including people with seizure disorders, those taking drugs that affect neurons in a particular way, or anyone with a deep-brain stimulation device or a heart pacemaker implanted.

While people have differences in cognition based on age or other health factors, Figeys says the treatment could apply to a wide range of groups, including healthy adults looking to increase their performance in demanding circumstances, such as military pilots, NBA players and Olympians.

Figeys and his collaborators in the Department of Communication Sciences and Disorders have already done several studies looking at tDCS in various populations. In one study, they stimulated the brain of a person who acquired aphasia, a speech-language disorder, after a stroke. The patient was consequently able to accomplish his script training, a protocol speech-language pathologists use with aphasia patients, potentially at a quicker pace.

In a forthcoming study, the U of A research team found that tDCS increased the executive functioning processes of inhibition and cognitive flexibility in older adult patients with depression or anxiety. Another study, to be published this summer, shows that healthy young adults between the ages of 18 and 36 who received a single session of tDCS had a significant boost in cognition and blood oxygen to specific regions of the brain.

“It increased their cognitive performance in the realm of cognition called working memory, with an increase in oxygen in the stimulated dorsolateral prefrontal cortex,” says Figeys, with the 20-minute tDCS session increasing participants’ performance on a working-memory test by more than 13 per cent.

Figeys notes that working memory is one of the cognitive processes affected early on in numerous disorders, including Alzheimer’s dementia, making it an exciting area to see positive results.

Similar studies have shown cognitive benefits from a single session can last anywhere from 10 minutes to an hour. But as Figeys explains, there’s also research showing that the effects can last longer as a person receives repeated treatments.

“It can potentially be used in almost every brain-related disorder I can think of, in some way,” says Figeys. “Numerous clinical populations – such as in stroke recovery, chronic pain, mental health populations – and in healthy populations as well.”