If you find yourself cursing your cellular provider for the lack of cell signal, remember that it just might be the fault of your car or building’s construction materials or even that leafy tree to your right 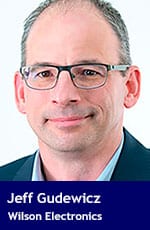 Picture this: You’re driving home from work, just about to finish up a phone meeting through your car’s Bluetooth, when suddenly your call drops – you’re once again in that dreaded dead spot in the middle of the city where important conversations go to die. The default culprit you’re most likely to blame in this scenario is your mobile carrier or cellular service provider for not installing enough towers to cover you.

However, did you know it would be nearly impossible for a cellular carrier to install enough cell towers to get rid of every single dead zone?

That’s right – it’s not always your carrier’s fault that you can’t get a decent cell signal. But if not them, then who or what is to blame?

It turns out that, in addition to the obvious factors like how close you are to the nearest cell tower, there are also a number of other elements that can impact the strength of your cellular signal.

When you’re inside a building, building materials like stone, wood, brick, steel and fiberglass insulation are often the culprit because they obstruct cell signal. Even newer materials such as LEED-certified windows can be a huge source of cellular signal deterioration due to energy-efficient coatings that attenuate cell signal and prevent it from coming into a building. Other factors limiting cellular connectivity include terrain such as hills and mountains, vegetation such as thick forests and tall trees, and even the weather!

Besides physical obstructions to cell signal, available network traffic and bandwidth can also reduce overall cellular connectivity. For example, the more data-intensive apps and videos you’re running on your phone, the more bandwidth your phone requires to operate, which can negatively impact your signal. And in densely populated areas, it’s not uncommon for signals to be degraded due to increased demand as everyone competes for the same limited signal bandwidth. With the number of cellular-connected devices rising rapidly each year, this will continue to play a large role in cellular signal strength issues.

Now, you’re probably thinking that all of these problems will go away or be drastically lessened as the 5G network continues to grow. But if that’s what you’re thinking, you’re wrong. Turns out that many higher 5G frequencies will actually have even more issues with weak cellular signal than current 4G offerings do.

The vast majority of 5G promises, such as lightning-fast data speeds and increased network capacity, will come from the rollout of 5G on millimeter-wave (mmWave) frequencies and mid-band spectrum. This new generation of wireless technology will lead to an explosion in IoT applications especially, ushering in the fully-realized age of virtual and augmented reality, industrial automation, smart cities and autonomous vehicles.

Unfortunately, mmWave technology deteriorates greatly with distance as compared to traditional lower frequency cellular signal. This is because the elements discussed above, such as energy-efficient building materials, terrain, and vegetation, severely attenuate 5G signals and lead to it travelling over shorter distances. For this reason, LTE will continue to be an important source of cellular signal and function alongside 5G for years to come.

While installing more cell towers will help, it’s simply not possible for cell carriers to install enough towers to reach everyone using 5G. Plus, the less population-dense an area, the less return on investment there is when installing new cell towers.

However, there is something the average consumer can do to reduce both 4G and 5G dead zones: install cellular signal boosters in their homes and vehicles. Cellular signal boosters from providers like Wilson Electronics and their consumer line, weBoost, capture existing outdoor signal, transmit it to the booster, and then amplify the cellular signal throughout indoor spaces so that dead zones are a thing of the past. For commercial businesses and buildings, there are cell signal amplifier solutions from Wilson Electronics’ commercial-grade brand, WilsonPro, that can improve cellular signal for entire office buildings, apartment buildings and other large spaces.

So the next time you find yourself cursing your cellular provider for the lack of cell signal on your drive home, at the office, or in your home, remember that it just might be the fault of your car or building’s construction materials or even that leafy tree to your right, and turn on a cell signal booster so that you never lose a call again.

Jeff is a Troy Media Thought Leader. Why aren’t you?