Quebec needs Alberta as much as Alberta needs Quebec 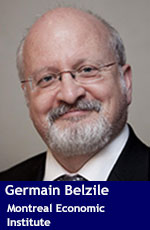 In a speech following his election victory this week, Alberta premier-designate Jason Kenney extended a hand to Quebec, urging the province not to hinder the development of Alberta’s energy sector. We Quebecers should listen to him.

Alberta is looking for outlets for its hydrocarbons. Its oil reserves rank the province third in the world and Western Canada is one of the world’s biggest natural gas producers.

But Alberta producers struggle to get their highly-prized resources to international markets. Existing pipelines to the United States are insufficient and this bottleneck causes substantial downward pressure on prices, costing the province billions of dollars a year.

Moreover, access to new markets in Asia and Europe is compromised by the near impossibility of building new infrastructure.

Better access to international markets would be of considerable benefit to the Canadian economy in general and for Quebec specifically.

The sale of Western Canadian oil at international prices would generate additional tax revenues for the federal government and contribute to the creation of quality jobs in Alberta and all along the pipeline supply chain.

That would benefit several Quebec companies. When the Alberta energy sector is humming, it’s a direct source of quality jobs for Quebec workers.

Quebec also needs Alberta to be economically healthy more generally speaking. Our province has benefited from the federal equalization program since its introduction in 1957. For decades, Alberta has been a significant contributor to this program.

However, Alberta’s economy has deteriorated considerably in recent years, making the sums paid to Quebec harder for many Albertans to swallow. We can expect increasing pressure to modify the equalization program.

A Leger poll carried out on behalf of the MEI and released in December showed that the great majority of Quebecers (66 per cent) favour Western Canadian oil far ahead of oil from the United States (seven per cent), Algeria (three per cent), Nigeria (one per cent) or the Middle East (one per cent).

Moreover, 45 per cent of Quebecers think pipelines are the safest means of transporting oil, far ahead of the other options.

In short, Quebecers want Alberta’s oil and they prefer it be shipped by pipeline.

It must be noted that the emergence of hydraulic fracturing for oil, which has allowed the United States to become the largest producer in the world, produces only very light oil. That must be mixed with heavier oil before being refined.

For the moment, the United States imports this heavier oil from Mexico or Venezuela, where production is declining, or from Alberta. There’s a strong demand and what’s not produced by Alberta will be produced by others.

More openness from Quebec about Alberta’s concerns would improve the country’s economic prospects, which are intimately connected to the development of Western Canada’s energy potential.

Quebec and Alberta have been natural allies in the past and together, these two provinces could better oppose Ottawa’s centralizing impulses.

Evoking a supposed lack of social licence – a nebulous concept that even its defenders have a hard time defining – ignores the very strong preference of Quebecers for Canadian resources. It also harms our relations with Alberta and is economically counterproductive.

Let’s accept Kenney’s outstretched hand and work together for our shared prosperity.