During the most recent reconnaissance and sampling program at the Company’s 100%-owned, 98-sq km (9,800 hectares), Dakouli 2 Gold Concession (see Company news release dated September 10, 2020), Company geologists were able observe the overall mineralized footprint in the main zone (northeast corner of the property), as defined by artisanal mining activity, at greater than 400 meters in an east-west direction, by 200 meters north-south. The artisanal miners (“orpailleurs”) are down in some shafts as deep as 80 meters.

Selective grab samples from this recent program, obtained from depths of 30 to 70 meters below surface, assayed from .036 grams-per-tonne (“g/t”) gold (“Au”) to as high as 98.9 g/t Au. To date 40 grab samples have been recovered from Dakouli 2 by Company geologists, with 11 of the 40 grab samples assaying in excess of 10 g/t Au, including, in addition to the sample noted above, high-grade grab samples of 27.5, 29.5, 12.4, 11.1, 17.6, 10.8, 10.9, 12.8 and 49.7 g/t Au (see Image 1 following). All samples noted were obtained from artisanal shafts and pits, from depths of 8 meters to 50 meters below surface. This, in addition to the significant artisanal presence, suggests the potential for significant sub-surface mineralization throughout the main zone.

Based on these observations and sample grades the Company is now determining exact drill pad locations for a maiden drill program, scheduled to begin later this fall. Once a drill company is engaged and drill targets finalized, the Company will provide details on the expected date of commencement. 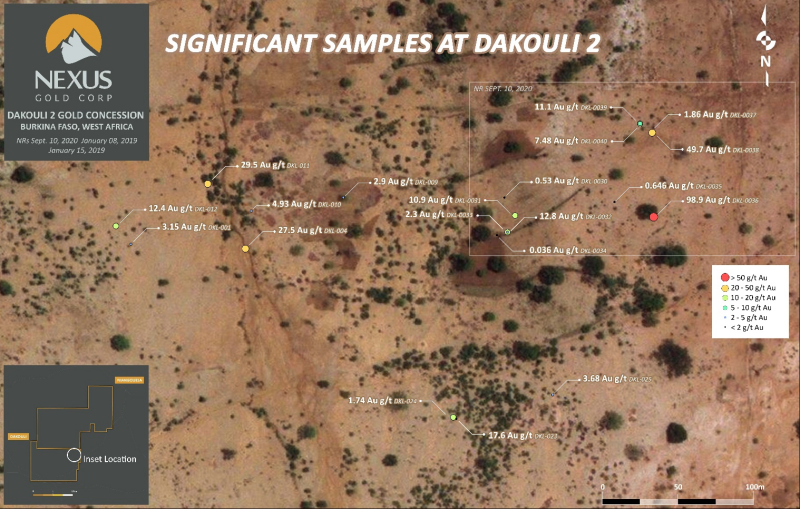 The Company recently conducted its first drill campaign at the 1,398.5-hectare McKenzie Gold project, located in the prolific Red Lake gold camp, northern Ontario, Canada. Historical drilling had already confirmed the presence of narrow, gold-bearing veins in the St. Paul’s Bay region of the southernmost section of the property. The inaugural Nexus drill program was able to replicate these same types of intercepts, with several intercepts in the half meter to 1.5-meter length assaying between 3.42 g/t Au to 7.43 g/t Au. A higher-grade intercept, 2.75 meters of 13.25 g/t Au (including 1 meter of 36.2 g/t Au) (see Company news release dated August 18, 2020) was also recovered.

The results from phase two drilling were successful in identifying a second style of gold mineralization at McKenzie, while the presence of these disseminated lengthier near one-gram intervals is viewed as a key development in establishing the presence of economic mineralization at the project. It is also notable that this type of mineralization more closely resembles Premier Gold Mines’ nearby past-producing Hasaga Mine, located approximately five kilometers east of McKenzie, which is estimated to host and Indicated mineral resource of 1.12M ounces of gold grading .83 g/t Au*.

Follow up drill programs are now being planned at McKenzie. The Company intends to conduct additional drilling in the area of holes MK-020-07 and 08, where the discovery of the 100 meter plus near one-gram intercepts occurred, and in and around hole MK-020-06, where the intercept of 13.25 g/t over 2.75 meters was recovered.

In addition, the Company is planning to drill test the island portion of the property. McKenzie Island is the site of nine historic grab samples grading between 53.01 g/t Au and 331 g/t Au. The number of these higher-grade samples recovered there make the island a compelling target for exploration drilling.

Once logistics and targeting are determined for follow up drilling, the Company will announce further drill plans at the McKenzie project for later this year.

Nexus’ earn-in partner, Leocor Gold (CSE: LECR), has been on the Dorset project site recently, located in the Bai Verte Mining Camp, central Newfoundland, Canada. Leocor has been conducting a reconnaissance program over the last month to update the condition of the known showings, clearing overgrowth around these areas, collecting grab and chip samples, trenching and mapping potential drill locations. Results of the prospecting are expected sometime in the next several weeks.

The Company optioned the Dorset project to Leocor for $1.25M in cash through 2024 and $1.5M in work expenditures through 2025. If all terms are met, Leocor will have earned a 100% interest in the project. If terms are not met, the project reverts in full back to Nexus.

Nexus is planning reconnaissance groundwork later this year at the Company’s other Newfoundland-based gold projects, including the GB Gold-Copper Project, the Bauline project, and the Black Ridge project. Details on these programs will be made available in the coming weeks.

Kruger Gold, a privately held company, holds an option to acquire the Company’s interest in the Rakounga Gold Concession by completing a series of cash payments totaling $1M in cash payments and by incurring expenditures on the property of at least $1,25M over a five year period. Kruger is currently on site at Rakounga conducting a soil grid program designed to tighten the grid already established by the Company’s earlier geochemical sampling. Kruger’s goal is to determine drill targets in and around areas where to date the best drill results have been generated.

* Note the reported lengths are intercepts and are not true widths

Warren Robb P.Geo., Vice President, Exploration, is the designated Qualified Person as defined by National Instrument 43-101 and is responsible for, and has approved, the technical information contained in this release.

Nexus Gold is a Canadian-based gold exploration and development company with an extensive portfolio of eleven projects in Canada and West Africa. The Company’s West African-based portfolio totals five projects encompassing over 750-sq kms of land located on active gold belts and proven mineralized trends, while it’s 100%-owned Canadian projects include the McKenzie Gold Project in Red Lake, Ontario, the New Pilot Project, located in British Columbia’s historic Bridge River Mining Camp, and four prospective gold and gold-copper projects (3,700-ha) in the Province of Newfoundland. The Company is focusing on the development of several core assets while seeking joint-venture, earn-in, and strategic partnerships for other projects in its growing portfolio.

On behalf of the Board of Directors of

Neither the TSX Venture Exchange nor its Regulation Services Provider (as that term is defined in the policies of the TSX Venture Exchange) accepts responsibility for the adequacy or accuracy of this release. This news release may contain forward-looking statements. These statements are based on current expectations and assumptions that are subject to risks and uncertainties. Actual results could differ materially because of factors discussed in the management discussion and analysis section of our interim and most recent annual financial statement or other reports and filings with the TSX Venture Exchange and applicable Canadian securities regulations. We do not assume any obligation to update any forward-looking statements, except as required by applicable laws.