TheNewswire – November 19, 2020 – Xander Resources Inc. (TSXV:XND) (FSE:1XI) (OTC:XNDRF) ("Xander" or the "Company") is pleased to announce that ground exploration of its Val d’Or East Senneville Property has been completed by its Geological team. The Val-d’Or Senneville Claims comprise of over 90 sq. kms and are contiguous to Probe Metals and Monarch Gold and are in close proximity to QMX Gold, all of which have active gold discoveries.

Xander’s Senneville Claim Group is located in the eastern part of the Abitibi Greenstone Belt, about 25 km northeast of the gold mining centre of Val-d’Or, Quebec. The Claim Group is comprised of 151 claims in three groups which extend from the Lacorne Batholith in the west to the contact area of the Pascalis Batholith in the east. Probe Metals announced the new discoveries and are currently drilling to expand their Val-d’Or East Project. (see the Probe Metals press release October 28, 2020). 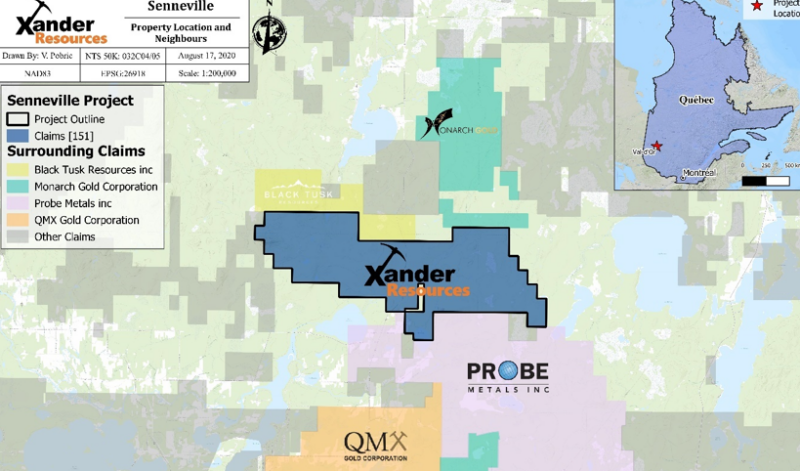 The rocks observed are mainly of composition basaltic and pyroclastic while the structure is characterized by a well defined, shear zone containing quartz-carbonate veinlets (Stockwork) and brecciated areas, veins of tension, folds (kink) and faults. The mineralization consists of trace pyrite, pyrrhotite and chalcopyrite. These minerals are mostly associated within a network of quartz veinlets (stockwork) present in the rock and are fine grained and rarely in clusters. The weathering consists of chlorite and silica, magnetite and carbonate and locally ankerite.

An old trench approximately 75 meters in length, called the Cere zone, that was excavated in 1946 and returned a value of 49.5 g/t Au (manual sample) was examined. Water completely covered other structures that could not be examined. An examination of the blocks coming from the excavation of the trench was made using the BeepMat and three (3) samples were taken. A mirror fault was noted in the south and a rusty quartz vein of more than 20 centimeters was sampled. The blocks examined were of the same composition as the rocks mapped in the trench. 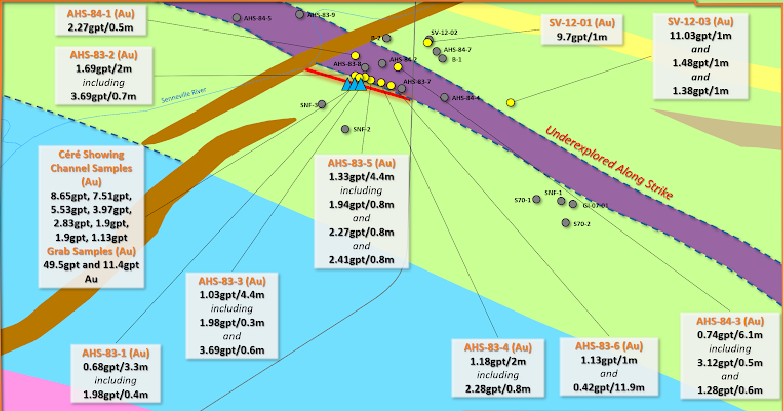 Drilling locations have been targeted for the area and a plan prepared for a systematic program to position 9 drill holes in the area East-South-East of the Cere Gold zone.

The 2012 boreholes SV-12-01 (9.7 g/t Au) and SV-12-03 (11.03 g/t Au) will be doubled (twinned) in order to confirm the three (3) previously intersected Gold zones. The other 7 holes were positioned further east with the objective of extending the mineralized zones and providing a better understanding of the structures containing these intersections.

James Hirst, CEO stated, "To the North Xander’s Senneville Claim Group is contiguous to Monarch Gold which, on November 2, 2020, announced their acquisition by Yamana Gold for approximately $152 million, effectively selling their Wasamac underground project to Yamana. Wasamac has proven and probable reserves of 1.8 million ounces of gold at 2.56 g/t. To the South, Xander’s Senneville Claim Group is contiguous to Probe Metals which, on October 20, 2020, announced expansion drilling with four drills currently active on the Pascalis gold trend where recent drilling results of 5.9 g/t Au over 9.2 metres were reported. Probe also announced the discovery of two new gold zones, one of which returned 94.1 g/t Au over 0.6 metres. Just like our Fenelon project we are in the right place at the right time."

Xander Resources is a junior exploration company focused on developing accretive Gold properties within Canada. The Company currently has a focus on projects located within the Province of Quebec.

Daniel Turcotte, P.GEO. an Independent Qualified Person ("QP") as such term is defined by National Instrument 43-101 – Standards of Disclosure for Mineral Projects, has reviewed and approved the geological information reported in this news release.

The QP has not completed sufficient work to verify the historic information on the Properties, particularly in regard to historical exploration, neighbouring companies, and government geological work. The information provides an indication of the exploration potential of the Xander property but may not be representative of expected results.

ON BEHALF OF THE BOARD OF DIRECTORS