Net migration to Alberta from other provinces rising 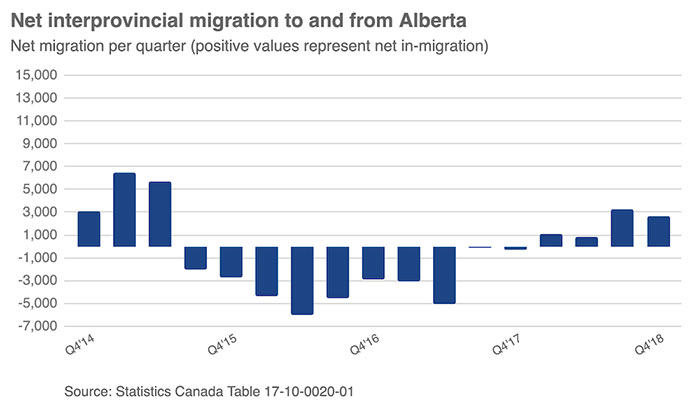 Green shoots are popping up to suggest Alberta’s economy is improving, including the increasing number of people moving to Alberta from other provinces.

“During the final three months of last year, 13,952 people moved to Alberta from other parts of the country. At the same time, 11,329 Albertans moved away to other provinces and territories, leaving us with a net gain of 2,623,” according to ATB Financial’s Economics & Research Team in its daily The Owl economic update.

“Alberta saw a net gain of 7,736 people for 2018 as a whole, the highest level of positive net interprovincial migration since 2014.”

ATB said that Alberta was on the losing end of interprovincial migration prior to 2018. For the preceding 10 quarters, or two and a half years, more people left Alberta than arrived from the rest of Canada, due to the tough economic backdrop, it said.

“The out-migration over those two and a half years amounted to a net loss of more than 31,000 people,” explained ATB.

“Alberta’s economy has since improved. Canadians in other provinces are starting to take notice and consider Alberta as a possible new home. As such, we expect in-migration to remain positive in 2019.”