Why politics has a key role in pandemic busting

If everyone is to be a contributing member of Team Canada, then all players should pull their weight in what is truly a do-or-die situation 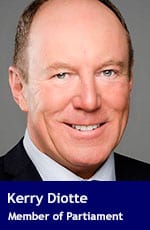 Prime Minister Justin Trudeau is urging politicians of all stripes to be part of a Team Canada approach to defeat the COVID-19 pandemic. I’ll buy into his patriotic pitch – to a degree.

We must all help. Stay home. Wash our hands. Social distance. Canadians can recite basic COVID-19-busting advice as easily as the words to O Canada. In extraordinary circumstances there’s a need for extraordinary measures such as closer co-operation between normally warring, partisan political parties.

As a member of Her Majesty’s Loyal Opposition Conservatives, I believe we’ve demonstrated that co-operation with the minority government Liberals by – not once, but twice – fast-tracking legislation through the House of Commons to quickly get relief to millions of hard-hit  Canadians.

Conservatives successfully pushed Liberals for improvements to the aid package, including seeing a 10 per cent employee wage subsidy boosted to 75 per cent, and ensuring employers will quickly know if they’re eligible for the program.

But I bristle at an accusation from the PM and parroted by some media that pushing back against the Liberals in these trying times is somehow “politicizing” the pandemic. That’s way offside.

If everyone is to be a contributing member of Team Canada, then all players should pull their weight in what is truly a do-or-die situation. I can almost hear legendary Don Cherry declare that this is no time for floaters, big egos or bone-headed game-losing screw-ups.

But this is a serious game and mistakes were made – and as members of the Opposition, we have a duty to Canadians to point them out and demand our government do better.

For instance, it was revealed by CBC that a Canadian military intelligence unit issued a dire warnings about the Wuhan, China, outbreak way back in January. CBC quoted a leading intelligence expert as saying that “raises serious questions about information-sharing within the federal government – and its possible failure to heed early warning signs.”

Opposition MPs must demand answers from our federal government over this.

Conservatives pointed out that other nations, including Taiwan, South Korea, Singapore and New Zealand, have fared better in their battles against COVID-19. It’s widely conceded those countries were quicker to react, in part, by having tighter borders, earlier testing and more stringent quarantines than here.

Opposition politicians were compelled to call those missteps into question.

As late as February, federal Health Minister Patty Hajdu and other Liberal ministers were telling Canadians that the risk of getting COVID-19 in this nation was low. That same minister pooh-poohed Conservatives and others calling for stronger measures at our borders.

Trudeau intimated such demands bordered on racism. “There is no place in our country for discrimination driven by fear or misinformation,” he said on Feb. 1. “This is not something Canadians will ever stand for.”

Airport screening of foreign-arriving passengers to Canada was so lax for so long, it inspired an angry Alberta United Conservative Party Premier Jason Kenney to show up at Edmonton International Airport with a video camera to expose the problem. He vowed to bring in Alberta officials to fix the issue.

Amid the pandemic, Illegal immigrants continued to stream into Canada from the U.S., notably at the notorious Roxham Road in Quebec. Conservatives have long called for a closure there but Trudeau only acted on March 20, saying such “irregular” migrants would now be turned back.

One of the most egregious errors of all was that Canada was short of critical medical supplies despite getting hard-hit by the SARS outbreak that came out of China 17 years ago. The head of the Canadian Medical Association has pointed to a 2006 federal document that warned Canada had to be better prepared for a pandemic exactly like this, in part by having a large stockpile.

Canadians were aghast upon learning that the federal government in February actually shipped 16 tonnes of personal protective equipment overseas, including to China. The Conservative Opposition rightly called out the government over this.

Are we team players on Team Canada on that issue?

You bet your Ryan Smyth-autographed Oilers jersey we are.

Like many MPs, my local staffers and I have been working flat-out to answer inquiries from concerned constituents to help them navigate government red tape and speed up government processes that seem slower than ever amid these trying times.

It’s true it will take a Team Canada approach to conquer the COVID-19 plague. But part of being an effective team is knowing when some of your top players aren’t pulling their weight and calling them out on it.

I’ll give the governing Liberals credit for trying to the best of their abilities to tackle solutions to this mind-numbing global pandemic.

But, let’s face it, most true-blue Canadians couldn’t be faulted for thinking that neither the captain of this federal Team Canada, Justin Trudeau, nor his supporting first-line ministers could ever be mistaken for Connor McDavid.

Kerry Diotte is a Conservative member of Parliament for Edmonton Griesbach. He can be reached at kerry.diotte@parl.gc.ca

Kerry is a Troy Media Thought Leader. Why aren’t you?